Rescue and collapse in Sweden

In May 1945 the German Nazi regime had to capitulate. The surviving Jews at Oskar Schindler’s factory in Brünnlitz were also liberated. Many had lost all their relatives, others hoped to find survivors among their relatives and friends. Hilde Berger, like most, went to Poland with new identity documents to look for them. „With the identity documents we could travel for free and this time it was a completely different journey. The last two carriages were reserved for us and the Czechs wrote in large letters on them: ‚Concentrackis‘. At every Czech station people came with flowers, fruit and other food and congratulated us on our survival. The climate changed dramatically as soon as we crossed the Polish border. The Poles came to the train, stared at us in wonder and said: ‚So many of you are left? We thought Hitler had finished with all of you.‘“ (Hesse, p. 56). For several weeks she searched in vain for relatives in Krakow. She heard stories about Jews who were killed when they tried to get their shops, houses or other possessions back after their return. She was desperate, without hope and only wanted to leave Poland immediately.

In September 1945 she returned to Prague, to a camp for >displaced persons<, where she worked as a typist again. Her destination was now Sweden, where her friend Hannah Herz lived. Like her husband, the lawyer Hannah Herz, née Levy, from Essen, had been banned from working – both had been arrested in November 1936 and, like Hilde, had been imprisoned and sentenced in Magdeburg. Hannah Herz then sat together with Hilde Berger in the Jauer, Ziegenhain and Cottbus penitentiaries. With Hannah’s help Hilde received a visa and then flew to Stockholm on 8.10.1945 with provisional travel documents from the International Red Cross. After years of fearing and fighting for her life, she was now at the end of her strength: Hilde Berger collapsed physically and psychologically. She was unable to work for a long time and recovered only slowly, under constant medical care, until she emigrated to the USA in 1949.

Here, in New York, she met Alex Olsen. It was no stranger to her: they had known each other well since the early 1930s. At that time Alex Olsen was still named Werner Schmidt and was a member of her Trotskyist group in Berlin under the alias Alex. When Werner Schmidt was warned of his impending arrest, he fled to England. There he learned that the whole group was being watched by the Gestapo. Hilde Berger and the other members of the group, however, had not heeded his warning at the time and wanted to continue their underground work until they were arrested in November 1936.

In 1938 and 1939 Werner Schmidt worked as a secretary for Leon Trotsky, who lived in exile in Mexico. In the introduction to his book, Reinhard Hesse writes that Trotsky advised Werner Schmidt in 1939 to „leave Mexico and go to New York to visit his acquaintances in order to build up a livelihood in his profession as a printer, since he, Trotsky, would soon be coming to an end anyway“ (Hesse, p.10). That was good advice! Trotsky survived several attacks on his life, including an attack on his house by several agents of Stalin disguised as Mexican policemen. The house was subsequently guarded around the clock by several volunteers – in vain. The Soviet agent Ramon Mercader had approached a secretary of Trotsky under a false name and got engaged to her. This gave him unhindered access to Trotsky’s house. On 20.8.1940 he asked Trotsky to proofread a political article he had written. Trotsky was then beaten to death in his study by Mercader with an ice pick and died the following day from the severe injuries.

Werner Schmidt could no longer stand it in New York when Hitler’s Germany invaded and occupied one country after another during World War II: he volunteered for the American Army. Because his name Werner Schmidt was on record as a member of the pre-war Berlin resistance, he had his name changed to Olsen in case he was captured by the Nazis. Alex Olsen was then not deployed in Europe, however, but sent to India and returned unharmed from the war to New York.

Hilde Berger fell in love with Alex Olsen alias Werner Schmidt and married him in 1952. She took the name Hilde Olsen and received American citizenship in 1953. 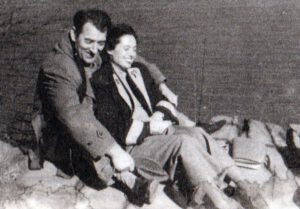 For many immigrants from Europe, the struggle for economic existence in hectic New York was not easy – but above all, Hilde Berger lacked European culture. So it was a great fortune for Hilde, her sister Rose and Alex to meet Oskar Maria Graf (1894-1967) and his legendary regulars‘ table. Oskar Maria Graf was an important and unique voice of German literature: he called himself a provincial writer. His works of art are mainly set in rural Bavaria. Early on he sensed the danger of emerging nationalism and fascism in the rural and petty bourgeois milieu of his homeland. In 1933 the Gestapo tried to arrest him, in 1934 he was officially expatriated. Via Austria, Czechoslovakia and the Netherlands he finally reached New York in 1938. He obtained a life-saving visa to the USA for the writer George Harry Asher, who was born in Vienna, and together with him founded the Stammtisch for German-speaking emigrants in 1943. „I actually live like a hermit in New York, nobody cares – then I have my weekly regulars‘ table, there I come together with Germans, with Russians, with Austrians, who all speak German, and then they think they are sitting somewhere in Munich“ (Oskar Maria Graf, quoted after Carola Zinner). The meetings always took place on Wednesday evenings: people spoke in German, ate, drank, exchanged memories and held political discussions. Writers read from their works. Other writers, artists and young visitors from Europe also took part in these meetings. Well-known participants and visitors of the Stammtisch were Bertolt Brecht, Alfred Gong, Wieland Herzfelde and Uwe Johnson.

Jewish refugees and Holocaust survivors regularly took part in these meetings – Graf himself was married to Jewish women in second and third marriages. These included Hilde Olsen and her sister Rose, Friedrich Glückselig [Happy] and Leo Glückselig, for whom the Stammtisch became a substitute home. Politically and economically they were Americans, but culturally they felt more European. After Graf’s death, the Stammtisch was run by Harry Asher, later by his widow Leah and then by Gaby Glückselig.

In 1995 Yoash Tatari made the multi-award-winning film „Glückselig in New York. Der Stammtisch der Emigranten“, which was shown in 1997 at the 11th Jewish Cultural Days in Berlin, among other events. The film shows this unusual regulars‘ table and Gaby and Leo Glückselig, George Harry Asher, Alex Olsen and Hilde Olsen tell of their experiences, of persecution, torture, flight and survival, of arriving in a foreign country and of changing their political views.

„I can’t breathe in this country“

This was the title of an article in the magazine „Die Zeit“, 17.3.1967. Journalist Lilo Weinsheimer reported on the trial of Fritz Hildebrand, the commander of the forced labour camps in Drohobycz and Boryslaw. The witness Josef Mestel had collapsed after his testimony before the jury court.

„When Mrs. Mestel hears that a journalist is sitting next to her at the table, she reaches out of my hand and says: „Please write, we were terribly afraid of this trip, of Germany. But in court they were good to us, doctors and nurses are good to us. Please write: many thanks from us.“

Almost everyone who has come so far – more than two hundred for this one trial – has had this fear. Many are taking them back with them. They give their testimony and leave immediately afterwards. They give the same reason as the American Hilde Berger: „‚I cannot breathe in this country.“ Others – it is the majority – seek contact, dialogue.“ (https://www.zeit.de/1967/11/ich-kann-in-diesem-land-nicht-atmen)

On one of the court days Hilde Berger heard the testimony of Berthold Beitz and was disturbed. Hilde Berger and Berthold Beitz met that very day and she accompanied Beitz to the airport in the afternoon. But the next day she flew back to New York as planned. She wanted to leave Germany as soon as possible – the country where she had grown up, the country that had killed many of her friends and relatives.

Hilde Olsen’s attitude towards Germany changed slowly: through reports, through letters, through visitors, through a meeting with Berthold Beitz in 1974, through relatives and friends of her husband Alex. She travelled to Germany several times with Alex, her sister Rose and husband. In 1996 she was invited by Alfred Biolek to his popular television programme „Boulevard Bio“ and was able to tell a million viewers about her life.

The young Orthodox Jew, the socialist Zionist, the Trotskyist resistance fighter had developed into a critical democrat committed to women’s rights and civil liberties. Politically she felt herself to be an American democrat, culturally she felt more like a European. After the death of her husband Alex, Hilde moved from New York to a nursing home in Denver, where she died on 17.11.2011.

© 2021 A Story of Destruction and Survival